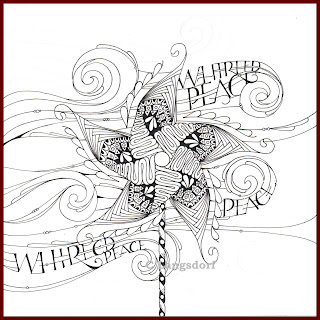 The 'Diva' does it again!
Challenge #40 is for International Day of Peace. TODAY. September 21st.
She passed along information about Pinwheels for Peace.
What a wonderful idea!

All over the world there are places putting out pinwheels
to remember our hope for peace.
and the most creative motto - whirled peace
while my ZIA is not complete,
I just had to get it  posted in time for International Day of Peace.

It was established by a United Nations resolution in 1981 to coincide with the opening of the General Assembly. The first Peace Day was celebrated in September 1982. In 2002 the General Assembly officially declared September 21 as the permanent date for the International Day of Peace. By creating the International Day of Peace, the UN devoted itself to worldwide peace and encouraged all of mankind to work in cooperation for this goal.

This is really lovely! I take it you've done some calligraphy too?
--Margaret

I think your Zentangle is just beautiful! I love all the details.

Oh what a Wonderful Whirled!!

This is really breath-taking!

It's dancing! It's lovely! I love the representation of the wind gusts - very cool!

Just beautiful...I love how it flows and gives the feeling of movement!

Wonderful, so light and airy. Beautifully done and, of course, your calligraphy is fabulous!

Thanks for visiting my blog.
Alphabee Tangles will focus on pen drawings that use patterns to create images. This style of art brings me great satisfaction in the creative process and in the finished piece.
A recent term - Zentangle ® - provides a modern label to this artform. I am pleased to have had workshops with Rick & Maria, the owners of the trademark for 'Zentangle.' Their energy has really ignited this form of art. I am not a CZT but I do create what would be labeled ZIAs and am happy to share my experience with others.
If you wish to see Calligraphy, please visit my original blog @ longvillagelettering.blogspot.com - there I will keep the focus on lettering for weddings and calligraphic artwork.
I welcome you to follow both blogs!